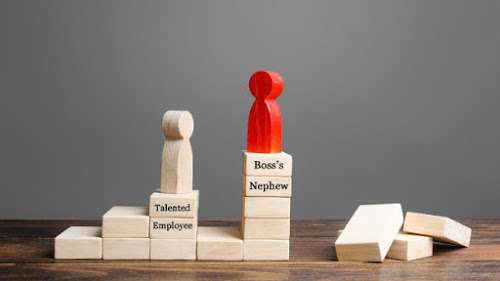 Animosity towards nepotism has again revived due to the untimely demise of actor Sushant Singh Rajput, a vivid and successful Bollywood star. People were taken back when they got to know about this tragedy. Who knew someone who had it all was going through so much that the only choice he had was to take his life. Such is the condition of the industry that is Bollywood. This malady is for the outsiders who have no acting or film industry links. This is not limited in Bollywood but also in almost all areas of importance.
What is nepotism?
Let's get well associated with the term "nepotism". It's the practice of giving favour or advantage to your kin or children in the field you work. Like the saying " the son of the king becomes the king" this rule is unjustified and the more talented and worthy people are not given equal opportunities.
This system is quite prevalent in Bollywood and until recently no one was opposing it. This hereditary aspect of the Indian industry has created boundaries for outsiders. Film making, politics, etc. have become a family business.
How did nepotism originate in India?
Did you know there was no such thing as nepotism for the first few decades after Indian independence? But families like the Nehru's had strong grips in this politics.
Also in the early 1980s, many vintage actors and directors started launching their sons. New actors like Sanjay Dutt, Sunny Deol, and more were launched by their fathers. This began nepotism in Bollywood
Nepotism is widespread in politics, judiciary, company, and in the film enterprise. It goes on even in sacred circles, arts, enterprise, and other types of institutions
Moreover, people admired that kids of the parent followed the same path. So their kids were an instant after them. The chances of getting into any industry were getting bleak.
Impact of Nepotism
You may think that there can't be many ill consequences due to nepotism but these points will prove you wrong.
Nepotism in Sports
Who doesn't know how a kid with a record 1000 runs was neglected and the son of legend Sachin Tendulkar was selected. The news caused furore across social networking platforms as people questioned why Sachin Tendulkar's son had made it instead of an auto driver's son who seemingly deserved it more
The unseemingly prominent sport of cricket has also shown nepotism, though it's not as strong as other sectors. Instances involving  Stuart Binny, Rohan Gavaskar, and very recently Sachin Tendulkar account for the situation. Home minister Amit Shah's son was elected as BCCI secretary.
Nepotism in Business
The Bajaj family is associated with the Birla household which itself has pertained to the Biyani family by marriage. The Kapoor families and many other Indian movie actors have brought their pupils into the movie industry with their approvals and impact.
The biggest industry is no different. Reliance industries will be handed over to the son of Mukesh Ambani.
Nepotism in politics
Indian Politics has encouraged the maximum of nepotism, despite being a democratic nation. Right from Motilal Nehru to Rahul Gandhi (Congress Party), India has been dictated by a dynasty of politicians. Also, that, of course, is on the too when it comes to nepotism in Indian politics, other examples of the Samajwadi Party (oversaw and constructed by Mulayam Yadav and later succeeded by his son Akhilesh Yadav) is another example of nepotism. In Maharashtra, the Thackeray’s have retained their domination from Balasaheb to Uddhav Thackeray.
Data proves that since 1999, the Congress has had 36 dynastic MPs appointed to the Parliament, with the BJP with 31 dynastic MPs who are not behind the Congress.
Is nepotism damaging India's growth?
It has a profound negative impact. Nowadays nepotism is not only growing in the government sector but also in the private sector as well. India is still considered a developing nation, many Indians are the first people in their whole generation who want to start a new career to build a better future. So many people are getting out in the world in hope of grabbing opportunities and is trying to make his or her name in the external community by getting some chances for success to break the brutal cycle of poverty which our forefather had to encounter throughout their life.
But it is very hurtful for meriting individual when he has to suffer from discrimination because of biased nepotism in every realm of life. Before getting into corporate society no one had the idea that nepotism is not limited only in government offices but after glimpsing this in the corporate world many people have lost the will to live.
Although some enormous corporates recruiters will not even care to read your resume if you don't have any good source to aid your appointment. This is the brutal truth. But we should not give up easily.
-----------------------------------------------------------------------------------------------------------------------

A 22-year-old, writer-entrepreneur based in India, who prefers to tell stories and write about everything with a touch of life. He has been helping startups and technologies with their content strategies. He's currently working on his book named "Too Many Thoughts, Too Much life".