Continued from Growing Up As Heather - Part 1

Meet Buff. He was my first dog in my life. He was there when I came to Debbie and Kirby’s house. He was dropped off at their house when he was a puppy during a thunderstorm. No one claimed him. So they kept him and took care of him and made him part of their lives.


Buff was never around children. So my guardians had to teach him how to be gentle with us which the longer we were around the more he got used to us. I would spend time with Buff as much as I could. When it was summer I would put him on a leash and we would go for walks and then I would brush his hair. We were somewhat close and then we got more animals and Buff had to learn to get along with them. Watching Buff with other animals was interesting. As time went on they learned to love each other every day!

Buff has taught me that all animals need to be in a loving home because they will change our lives forever. I think dogs know us better than our friends. Dogs have changed my life! 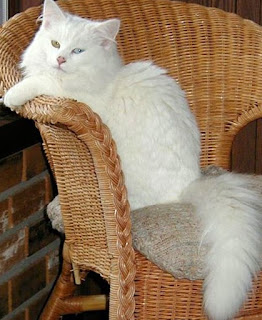 Meet Kotton. We gave him this name because he was all white. Yes, in the photo you can see that he has one blue eye and one eye green; that is how he was born. Kotton and Cory had a close relationship they always sat on the floor together in the kitchen and spend time together.

The favorite memory I have of him is while we would eat together Kotton would sit between one of us on the floor begging for food. He loved the outdoors and sometimes would come back from his walk with something in his mouth that he has caught! 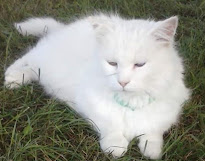 Kotton loved to enjoy just laying in the grass watching us do our things. He sure did enjoy scratching my legs every once in a while, but I think that is a cat thing. He was the prettiest cat that I ever had so far that is the 1st cat that I ever had and I miss him every single day. He was a wonderful cat. 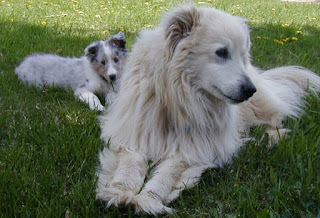 Meet Emily. Once we started noticing that Buff was getting older and slowing down with age that is when we adopted Emily. The first time we brought Emily home we did not know how Buff would react to a new member of our family, but once he got used to her being around they became friends. Emily would follow Buff everywhere in the yard. I knew that they would be friends! 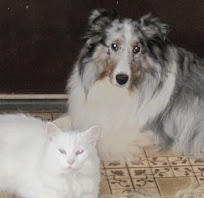 One day Buff was outside playing in the creek that was near our house and could not get up. So Kirby had to bring him in the basement and we had to make a decision and we did make a choice to let him go. He was crying in pain so we said our final goodbyes. It was a sad day along with it was raining. Buff was 13 years old when we had to say our final goodbye.

Saying goodbye to any animal is a hard thing to do because they change our lives for the better. Buff taught me that all animals need to be loved just like we do like people!

Born in Ukraine and brought up by her American parents, Heather is a writer and blogger who loves to share her personal experiences with everyone in the world.
Visit her blog encouragementforthejourney20.com